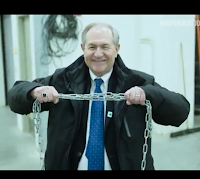 via Stateside Associates, Project Vote, BillTrack 50
Posted by cfidd at 4:49 PM No comments:

So much to talk about, so little time. To me, my Statehouse Action!

One Shining Moment... is about how long last night's pro-labor ruling in Wisconsin will stand, unfortunately. A circuit court judge ruled the state's new "right to work" law violates the Wisconsin constitution. This ruling is a big win for workers and for unions, but it's destined to be overturned by the state's solidly-Republican Supreme Court (which became a little more solidly Republican this past Tuesday, incidentally).

LOL the Vote: Wisconsin is one of the most effectively-gerrymandered states in the nation (e.g. in 2012, Democrats running for state Assembly won more votes than their GOP counterparts statewide [52%!], but they only won 39 of 99 seats).

If you can't beat them, kick them the hell out: In the continuation of a troubling trend I noted early this year, yet another GOP-controlled legislative chamber is booting reporters.

It's time for Chaps-free bathrooms: No, I'm not talking about the leg protectors.

Okay, so NOW you're mad? The hubbub in North Carolina over the GOP-controlled legislature's bathroom freakout has garnered quite a bit of attention, as has the backlash from businesses objecting to HB2, the state's newly-passed law that permits anti-LGBT discrimination and guts local government control.

In the 2012 cycle, RSLC contributed $300,000 to Real Jobs...Real Jobs helped 11 Republicans win open seats, retain seats, or take out a Democratic incumbent. All remain in the General Assembly, and nine voted for HB2.

While scaling back its election spending in 2014, Real Jobs still spent close to $35,000 helping re-elect GOP Sen. Chad Barefoot of Wake County, who voted for HB2. The RSLC contributed $25,000 to Real Jobs that year.

BTW, #PeriodsforPence is one of the best things happening on the internet right now. (It's a creative backlash to the heinous anti-choice law signed by Indiana Gov. Pence last month, which, among other things, requires miscarried or aborted fetuses be cremated or interred.)